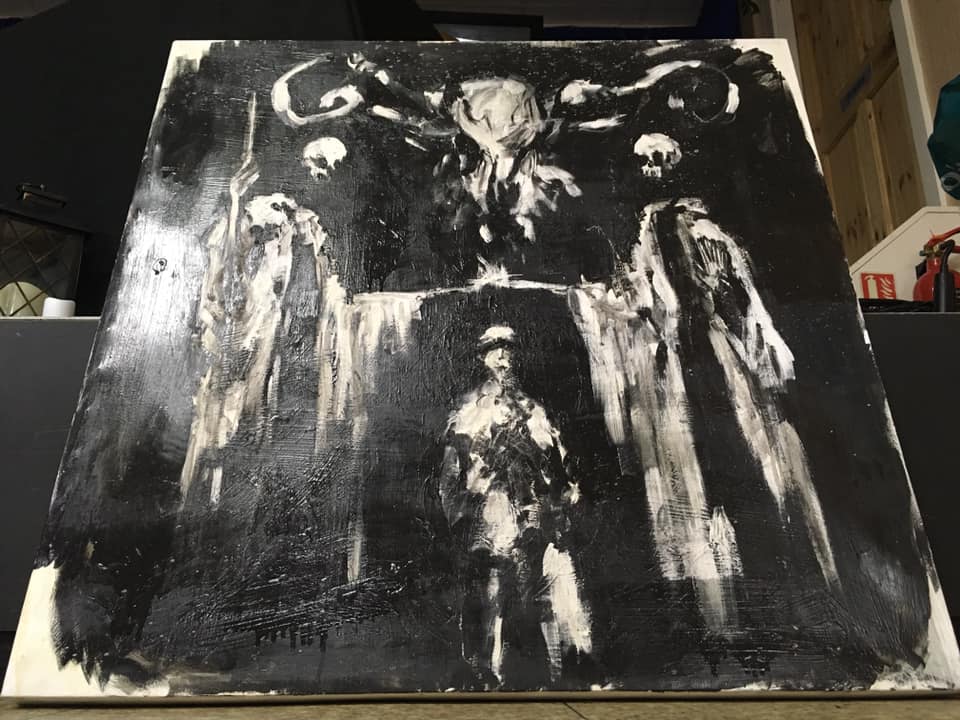 Saturday the 16th of Jan 2019, the travelling haunted museum came to Gloucester and cause chaos while live on stage, making a Gloucester woman “lyn cinderey” collapse when we brought forward the painting known as SINISTER.

Sinister is a black and white painting which the artist is unknown. it was commissioned for the film finders keepers in 2018 set in revesby abbey, but it never made it into the film, due to the actors, directors having a horrible feeling about the picture they didn’t like it at all, they didn’t want to work in the same room or area as it. after they finished filming they decided to leave the picture behind due to the uneasy feelings and fear around it.

The owner of revesby abbey didn’t like the picture either and wanted it gone, so it was given to mark penn from Yorkshire ghost hunts who took the picture back to his home, and he noticed that his crystal skull on his desk had turned complete around, and then his daughter began getting very ill health.

We then decided to use a random word generator. its a theory that spirits can use the devices to say what it wants, after turning on the word generator the first word was “mark” which is relevant because it came from mark penn. it then said upstairs on the generator and we heard dragging sounds from upstairs. later that night we put the picture upstairs and when we came back up we realised it was in a different spot.

Due to the responses of it saying stuff like it wants to go back, we decided to take it back to the place it was found, and when it was there. we was calling out asking questions and we got the odd little reply nothing to solid.., but mark penn had to leave the investigation for a short while, and we said bye to him, and something from the spirit box replied BYE, we then asked who you saying bye too it said MARK. we then started saying we are going to take the picture away now. and the meters starting going crazy, which detected all different energy fields.

A few weeks later it was time for to do the travelling museum, where we bring most of our collection of allegedly haunted items to the public to hear the stories, mixed with a night of mediumship. this night on 16th FEB was very intense. it was on the second half of the show, where we talk about the darker side of the museum, and sinister was up first to tell the story. Lyn Cinderey instantly started to feel odd, and shortly collapsed to the floor. Here is what she had to say:

Whether you believe or not in the ‘paranormal’ this is what happened.
I was fine All day and Night had a nice Meal and Chat with the Ghosts of Britain Team Linzi Sheeran Lee Steer Kenny Saw and Mark Smith from Paranormal XTV . The haunted museum night went well but as soon as the black & white painting came out Named by Lee as Sinister was shown I suddenly had a thumping headache , felt sick , and felt very drained and weak , I tried to fight it off or shrug it off but I only felt worse.
I was actually talking to people in the chat on Fb Live streaming as I knew the Team were doing there stuff and couldn’t reply to their fans direct at that time. I told them in chat How I felt but didn’t want to disturb the Team as it was Their Show. But got no better so as we always say in the ‘ paranormal’ circles to let people know if anyone gets effected in anyway , never ever thinking that would be me.
So I stood up and got their attention : I was slurring as if Drunk ( but do not drink any more ) and could hardly stand while explaining how I was feeling.
I turned after speaking to go and sit back down and the next thing was people were standing over me and I had collapsed. I felt vet weak and really ill and disoriented. I was then taken out of the room

I have been in bed and resting since and been trying to make sense of it all.
2 Other People became unwell that night as well.

So that is all for now with sinister. we are due to come to more places and towns, we have re booked Gloucestershire again for Saturday 12th October 2019.

The Black Monk of Pontefract

In 1966, the Pritchard family, of 30 East Drive, Chequerfield Estate, Pontefract, became the helpless victims of a terrifying chain of events that was to develop into the most unique and violent case of poltergeist activity in the documented history of the paranormal world.

It all began on the evening of 1st September, 1966; this was the time when Joe and Jean Pritchard had recently moved into the house and had decided to take a long – awaited holiday, taking their twelve-year-old daughter, Diane with them.

After much discussion and long heated debates, Joe and Jean reluctantly decided that, due to unresolved, long standing family issues, it would be better for all concerned if their fifteen-year-old son, Phillip, was to stay at home under the watchful supervision of his grandmother, Mrs Sarah Scholes.

After the Pritchards had loaded the car and departed on holiday Sarah Scholes and her grandson settled down for the evening in the living room. Mrs. Scholes occupied herself with her usual past-time of knitting, while Phillip turned on the TV for a night of viewing; although it wasn’t long before he had convinced his grandmother to allow him to go visit his friend who lived a few doors away on the same street.

At 9pm. Phillip returned home, as had been stipulated by his grandmother. No sooner had the fifteen-year-old entered the house than a gust of wind blasted through the house and the back door slammed shut. Immediately the living room felt icy cold. Understandably the two of them looked at each other in shock; each of them believing that the back door had mistakenly been left open and when Phillip entered the house through the front door it had resulted in a ‘through draft’ rushing through the downstairs rooms of the house and quickly dissipating the heat from the gas fire, making the living room instantly feel cold.