What a wild and bumpy week for the Doll-Tergeist.

The Creepy Bridal Doll has taken media by storm, most likely the most talked about alleged haunted doll within the paranormal world. with so much hype is annabell the doll to really watch???

With new news outlets around the world reporting the story every day so far. The sun, The mirror, Daily mail, Royal mail, Yahoo, Ladbible, Viral, Pedestrian, topix, Daily News and so much more.

One even did a animated re creation of the story… before the doll went to Deborah Davies Psychic Medium BUT there is now more to add to the STORY!

Before i do, i want to state “we haven’t said the doll is haunted” we are simply reporting what is happening around the doll. We are logging all events and trying to capture as much of it as possible.

So now for more reported happening,

Rotherham advertiser arrive at the house to take pictures and to talk to me about the story.  out of all the news papers they are the ones to really put my actual words on the print. so credit to them. the next day after the interview i had an email saying

So one of the reported phenomenons from debbie the old owner said it set off her smoke alarms at night, this guy from the papers comes to the house and that night his smoke

trigger off, Also the pictures of my dads scratches he was having trouble with. Like he said it could be just coincidence but still something we have to log of whats reported.

The Creepy Bridal Doll Moves To A NEW House…

the 3rd house the doll has now gone to and yes we have NEW reports… So who has the doll now? Deborah Davies Psychic Medium, we figured we want a medium to read the doll, to give us an honest opinion on the doll in question. Debs said sure and it went from there. we decided to do a LIVE hand over. (Video bottom of page) On the hand over we had a nice chat and did the live stream where viewers would say they could see the eyes moving and mouth. after the live stream, it wasn’t long until we saw a few live streams and the experiments began Here is what is reported while the doll has been there.

For now the doll is still with Deborah. 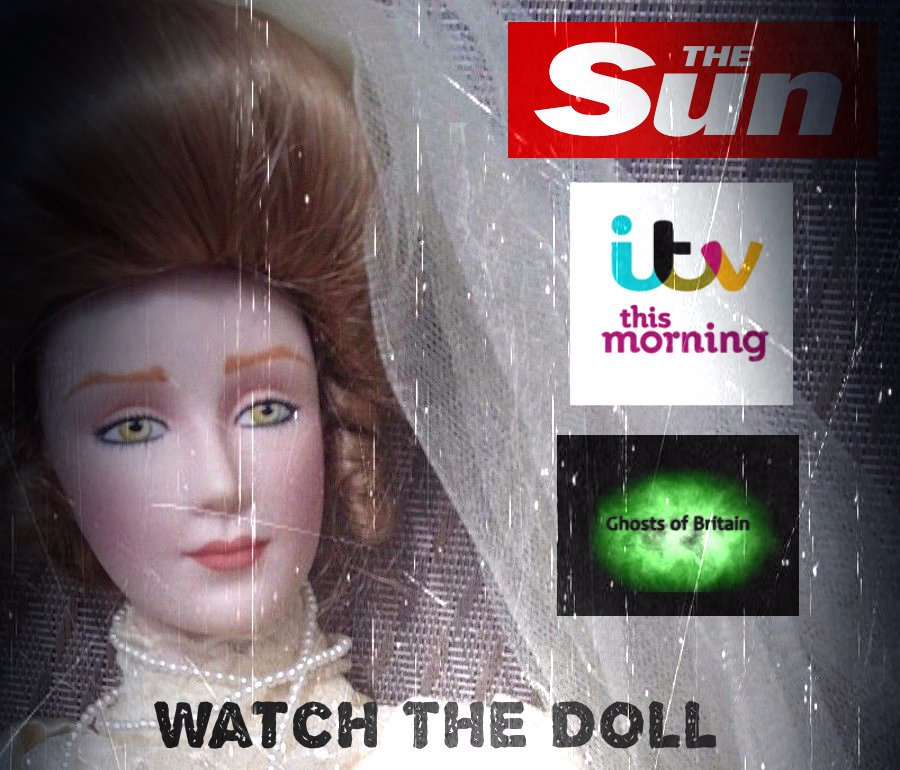 The Creepy Bridal Doll | Is making waves through the paranormal field, with all media attention it comes with good and bad publicity, so lets take a look at whats been going off within the media from the start to now.

Debbie Listed a doll for sale on EBAY, which was listed as creepy doll, she states she wanted to get rid asap and wanted it out of the house but doesnt say anything about the hauntings surrounding it on ebay “which could have increased the bids of the item”

The Sun News paper then decided to do a feature on the story of the doll been haunted.

from the Sun’s news paper report other papers also jumped onto the story.  The Mirror, Daily Mail, Yahoo News, just to name a few.

The Media attention did help sell the doll, of course and i dont think Debbie expected it to blow up as big as what she thought. At this stage on ebay you are not just bidding on and “alleged” haunted doll you are bidding for the fame associated with it, and is a reason it sold for so much,

Debbie could have postponed the auction and extended it until after this morning TV Show Aired The Interview.  There are Pros and Cons when it comes to selling anything within the media coverage.. the instant belief is “shes just making money” and this is to be expected.

When we are paranormal magazine / ghosts of Britain decided to bid for it. We was well aware of that and that this could be indeed a made up story just like every other alleged haunted item out there of course, and its a risk we happily decided to take as a team.

Which brings us to the show “this morning Live” on ITV.

Above video is the interview which debbie did on this morning tv program, at this point the auction ended 2 /  days ago for the alleged haunted doll. she briefly tells her story again but to much much larger audience and prime time TV.

Yet again this is a touchy subject when it comes to haunted items, on prime time tv, it is bound to get some stick no matter what the object, or “ghost sighting” people who watch ghost hunting programs tune into ghost hunting programs on tv late at night, they dont receive such bad publicity because the audience is well targeted and catered for. This is a day time tv show where the audience is wide and broad and most likely not even interested in the paranormal.

After the interview ended it didn’t take long for the papers to jump back onto the story but this time a different twist to their last report.

Mean While another News paper reports this…

On this morning show, Debbie was asked does she think its demonic, which, she replies saying

” i wouldn’t say demonic but there is something about it”  later that day this morning re posts up about the doll on their fan page.

They Realise its creating alot of attention, And they Post up another segment of the already shown video on their facebook fan page.

Meanwhile after the show ended the doll was packed up and sent from this morning tv show it self to our address.

While all this media attention was circulating it was also news and hot topic within the paranormal community of course, with some people mocking and having a joke about the story. Posting up an alleged haunted packet of mints for sale for a joke and we would like to Thank you for adding to the interest for the doll.

The Doll arrived the same day they sent it. at around 6.20pm, we was shocked to get the doll so fast..Charlene from paranormal magazine said we must do a live opening of the doll when it arrives it would be good I think so thats what we planned.

Stay Tuned for more updates of when the next LIVE appearance or documentary will be surrounding this item.

Maybe you will see her LIVE today…..