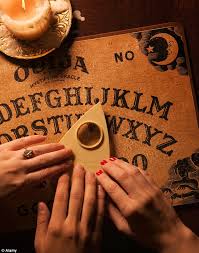 1 thought on “Ouija boards . A harmless board game or a direct line to the spirits?”