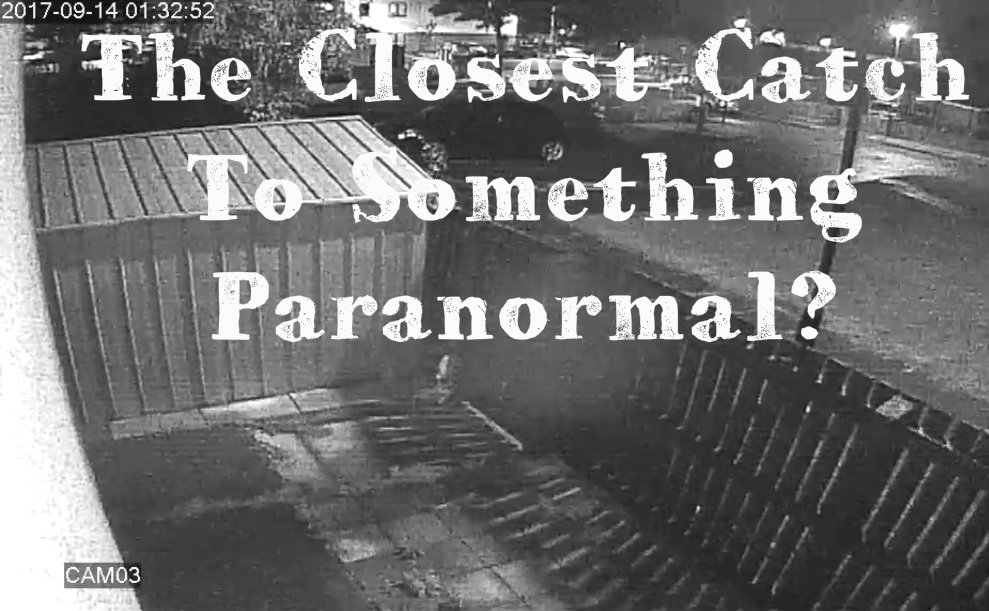 The Closest Catch To Something truly Paranormal???
Its rare that i am WOWED.. and I must admit i love this footage, whether it is a ghost, spirit or not.. it defiantly caught my attention. Here is the STORY!

The team was contacted by: Micky Fitzpatrick who asked if he could send us a video for us to look at for explanations, he went onto say within his opinion “its the best footage of a spirit I’ve ever seen in my life”

“Actual CCTV footage and this came after his upstairs neighbour told him of knocking at his window there’s is 4 separate incidents caught on footage and on each one the spirit is moving freely and heading for his neighbours window and then proceeds to go over the fence and change direction..”

When it comes to videos the most common we receive are orbs, and sounds, maybe the odd shadow, this video is very interesting to me.. at first glance when watching the footage, i thought this looks to be stream coming from the houses.. at face value what we see is a mist like object, which is white, which is moving around something of which i have seen before but then it stops in its tracks and wow… its interesting. i cant personally begin to throw an explanation because i first through stream simply travelling.. but this “steam like object” just stops still and then Carry’s on moving. also i like how its recorded from the CCTV system most you tube videos out there are hard to identify “from china”. i replied back with my views and simply said i cant explane why it would stop still and thanked micky for sharing.

MICKY REPLY.
“my uncle lives in a ground floor flat his neighbour upstairs alerted him the next day that he heard his windows being hit by stones or knocking sound at around 12-1 at night, So with my uncle being keen to investigate for possible criminal damage occurring, he stumbled across this at the exact time on one of the clips the spirit or whatever it is heads for his neighbours bedroom window, and to completly stop the steam claim, there is extra footage of this and in one the matter comes in from the right hand side and goes up the wall or through the wall, where my uncle lives is his passed fathers house, and he passed last year… The spirit is a big mass and my passed grandad was a big bloke, also the neighbour has told of weird noise from within and also my uncles has had doors wedged shut from the other side and also slammed on his finger, it’s all very, very strange and this footage is amazing”

“And yes that is the straight footage from his cctv program no editing involved it’s the original footage, we are genuinely in disbelief”

“this happens over a series of two nights, different angles, and travelling different directions, you can also say a man from Newcastle has captured. The footage, his name is Jimmy 🙂, we would also like to mention the most important factor and that is how the video was found as it ties in perfectly and hence how were so blown away by this footage,.. so the neighbour complained of stones being thrown or a knocking sound on his window at around 12-2 in the morning, fearing possible criminal damage the cameras were looked through, when I send you all the footage if you could include the first part of the video or the first clip as when the matter/spirit moves in front of the camera and then proceeds up the wall to the neighbours window”
Micky and his uncle would love your feedback.
all rights of video are strictly limited to my uncle and micky, feel free to share this post.

Charlene Lowe Kemp – Beliver-  After this footage was posted, some suggested that this may be a bug on the lens of the camera within, I can see why people may think this has a logical approach, I have to argue against this explanation though, this appears to float like a substance, it appears to be some kind of fog if anything, I have looked at numerous footage of bugs on a lens of a CCTV camera and I cant find anything that looks remotely similar, if you have any evidence to back this up please send it in order to debunk. I have looked in numerous forums also, regarding camera mites, each person who has had camera mites have stated that these appear to crawl across the screen and legs can be seen.

I have posted some of these forums to have a look what people have said to make your minds up for yourself.

Here is also an example of many I have looked through, which shows how bugs look like on camera…

if I was to debunk this footage in any way it would be in support of this article below and to say that the illumination has caused a reflective effect on the image, from maybe a porch light? a neighbour entering in or out the house? therefore if the neighbour was hearing sounds like stones being thrown, maybe they did go outside to check a few times? This is common in the cheaper night vision cameras available on the market…. The below article is interesting and some explain the same floating phenomenon. This doesn’t explain why it stops and starts again though and without seeing the surrounding area it is hard to tell if this is truly paranormal or just a IR reflection.

1 thought on “The Closest Catch To Something Truly Paranormal???”