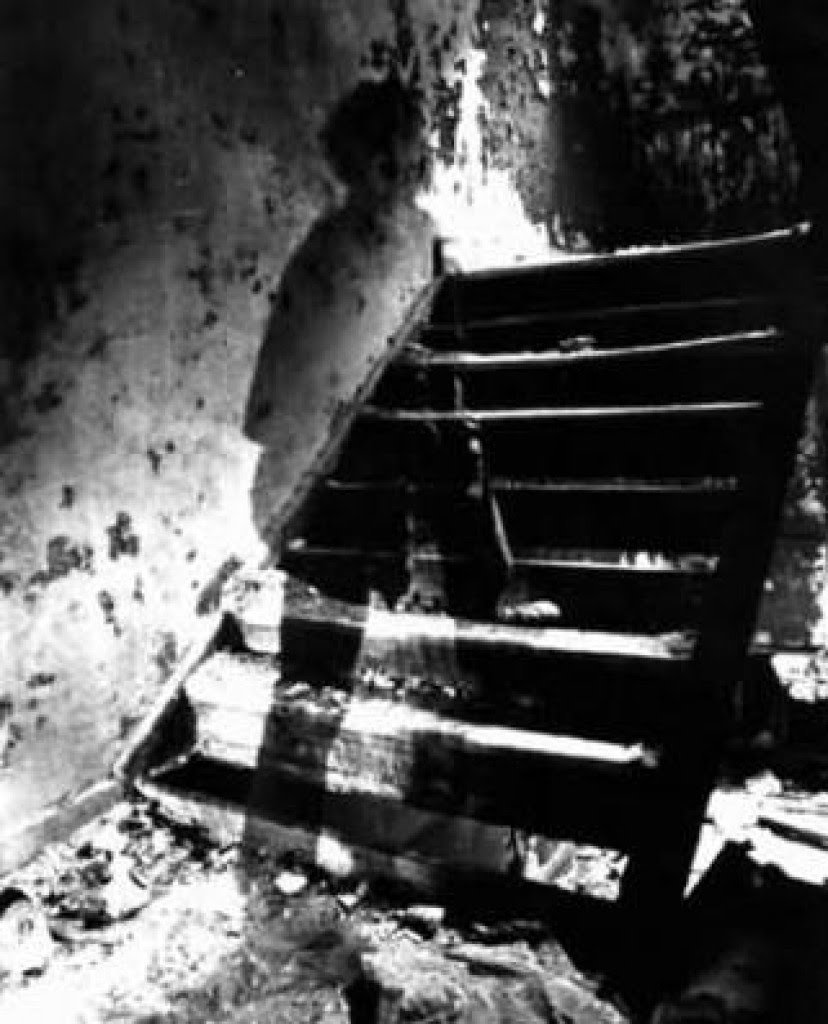 So I thought I would have a look for a few ‘GHOST photos’ that have not bean proven to be Faked even though some people may offer alternative view on what it may be, a logic approach but….it hasn’t been proven to have any editing done to make it a hoax photo….

This photo looks to good to be true but it had not yet been proven to be a fake!

This photo does not show a ghost, but does show a transparent hand on the top of a bureau. The photo was taken by a Montague Cooper roughly a century ago. He claimed to have no knowledge of how the hand got there.

Lord Combermere, once governor of Barbados and curious party in the case of the chase vault mystery, appears to be relaxing in a chair after his death. The photo was taken by Sybell Corner and was taken in the library of Combermere Abbey in 1891.

In 1919, this photograph was taken of a squadron of R.A.F. pilots. Behind one of the men, a face appears to the right, not wearing the uniform cap, appears transparent and stood very close to the man in front. The squadron identified the strange face as that of Freddy Jackson, who had died two days previous to this picture being taken.

THE BROWN LADY OF RAYNHAM HALL

The 1936 Brown Lady of Raynham Hall photo is properly one of the most famous ghost pictures in history. The story is that the believed ghost in this picture is to be of Lady Raynham, who was allegedly imprisoned in the hall by her husband for a long period of her adult life. There are many stories and sightings but this picture is always the centre point of the story.

The Tulip staircase ghost photo was taken in 1966 at the Greenwich National Maritime Musuem by Reverend Ralph Hardy. It appears to show a person struggling to get up the stairs with both hands pulling the railing. How the hands are positioned is very strange. They appear to be two left hands and the top one is longer.

Taken in Newby Church by Reverend Lord at NEWBY Church in North Yorkshire, England. The specter looks like a ghost of the murderer from the scream films and to add to the scare factor the photo has been analysed and it was found that whatever or whoever it was would have measured 9 feet tall.

Corroboree Rock in Austrilia is the location which this photo was taken in. The subject appears to look like a women holding binoculars. She is looking to the right of the photo and appears to be simply watching the wildlife.

Soldiers are popular subjects within ghost photos especially civil war soldiers. This picture dares back to the civil war and appears to look like a ghost of a soldier walking a set of stairs.

In 1959 Mable Chinnery went to the cemetery to visit the grave of her mother. She took some photos of the gravesite and turned and took a picture of her husband sitting alone in the car’s passenger seat. The photo was developed and this came out….someone sitting in the backseat wearing glasses. Mrs Chinnery swore that the ‘backseat driver’ was none other than her own mother…whose grave she was stood next to when the photo was taken.

In 1924 James Courtney and Michael Meehan, two crewmen of the tanker S.S. Watertown, were accidentally killed by gas fumes while cleaning a cargo tank. The crew of the Watertown, on its way to the Panama Canal from New York City, buried the two sailors at sea off the Mexican coast. That was on December 4th. On December 5th the first mate reported that the faces of Courtney and Meehan were appearing in the water off the port side of the ship. Over the next several days every member of the crew witnessed the faces appear and disappear, including the ship’s captain. When he reported this to his supervisors after docking in New Orleans it was suggested that he try to photograph the faces. Captain Keith Tracy bought a camera and the ship was soon underway again. Sure enough, the faces appeared, and Tracy took six pictures, then secured the camera in the ship’s vault. The camera was not removed until it was taken to a commercial developer after docking in New York City. Five of the photos showed nothing unusual, but the sixth clearly showed what was said to be the faces of the two dead crewmen. No evidence of forgery or tampering of the film was ever discovered. The faces stopped appearing after a new crew was brought aboard the Watertown.

GHOST IN A FIRE

On November 19th, 1995, Wem Town Hall in Shropshire, England was engulfed in flames and burned to the ground. As firefighters tried to stave off the inferno a town resident, Tony O’Rahilly, took pictures from across the street using a telephoto lens on his camera. There, rather clearly in one of the photos, is what looks very much to be a small girl standing in a doorway, with the brightness of the flames behind her. No one ever remembered there being a small girl present on scene, much less in that close a proximity to the fire. The photo and the original negative were turned over to a photo expert who decided that the picture was 100% authentic: “The negative is a straightforward piece of black-and-white work and shows no sign of having been tampered with.” In 1677 a fire destroyed many of Wem’s wooden houses. The fire was said to have been caused by a 14-year old girl named Jane Churm, who had been careless with a candle. Churm died in the fire along with several others, and her ghost is said to still haunt the area.

After publishing this article it has been brought to my attention that there is a belief that this photo could have been a hoax but there is no 100% that it actually was…. Brian Lear casted doubt over it as a picture taken in 1922 appears to have a girl similar in it…to read the article relating to this please see the link below 🙂

Below article argues why they think it isn’t