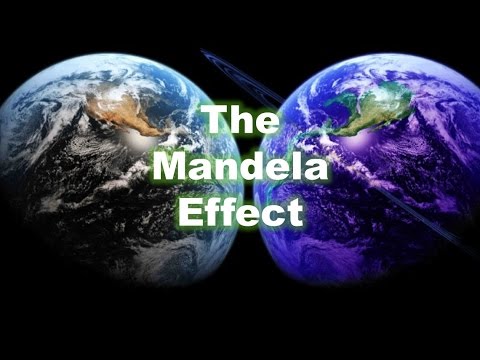 The Mandela Effect was named by paranormal enthusiast Fiona Broome in 2010. Fiona discovered she wasn’t the only one who wrongly believed Nelson Mandela died in prison in the 1980s.

Fiona shared her memories and thoughts in a group and set up a site called http://mandelaeffect.com/. Since then the Mandela effect has took the internet by storm with many people coming forward to share the same thoughts, events and memories (seeing it on TV,  hearing about it on the Radio or seeing it in the papers) even though in the archieves there is no evidence of such in reality. Some even claimed that they had learnt of Mandela’s death at school.

At this time Mandela was alive at the time and he actually died in December 2013. Three years later, after Fiona had voiced her memories if it.

There are many different theories to explain the Mandela Effect and when exploring research into the term can leave you some what mind blown!

We are living in some kind of parellel universe as believed by Fiona Broome.

Time travellers have gone back into time and have changed our present.

There is no simple explanation, our explanations on it would be down to is our own opinions on what is occuring, it is something that people have tried to explain and have reached their own conclusions on. Best thing to do, if you want to look into the theory more is to look up the 3 mentioned explanation theories above and come to your own conclusions on it.

I feel it is also important to mention that its believed that the bible makes reference to The Mandela Effect and this could also be another explaination on it.

Some alleged examples of the Mandela Effect are quite easily debunked. If you grew up knowing the line from the Lord’s Prayer as ‘Forgive us our trespasses’ you may very well be taken in by a Youtubers conspiracy theory that the text has changed over night to ‘ Forgive us our debts’ and upon checking it, it will say ‘debts’, but after researching you will find thats theres always been different versions that have been favoured by different denominations.

Regardless of what conclusion you come to, its interesting to say the least!

Curious George never had a tail

People claim to remember seeing curious george use his own tail to swing from tree to tree but if you look up pictures of him now, you will find that he doesnt have a tail.

No dash in Kit Kat

People remember the Kit Kat bar being spelt “Kit-Kat” with a dash, but there isnt one and the company has claimed that there was never one. This frustrates people who seem to think that at some point there was one.

Snow White – It never was ‘Mirror, Mirror on the Wall’