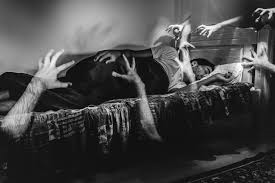 people shrug off ghostly activities and say its this or something else. but is this a cover up to not admit the truth that they do indeed think that they have experienced something which they think could be a ghost?

I think its natural not wanting to admit you have seen a ghost, when they are not scientifically proven to exist. the truth is people are scared to admit they have encountered something paranormal to them, because they will think everyone will laugh at them, or find them strange.  Before this poll, i guessed the percentage would be high over 70% and i was very close to the target.

Here is the LIVE Poll with over 500 votes.

i think if we asked this question 20 years ago. it would be more 50 / 50. we now have alot of TV Shows with the wrong education on what is presented to the audience which will make people think towards they have seen a ghost.

A very interesting POLL, it goes to show. you are not the only one who thinks they have seen a ghost. You ARE NOT ALONE.